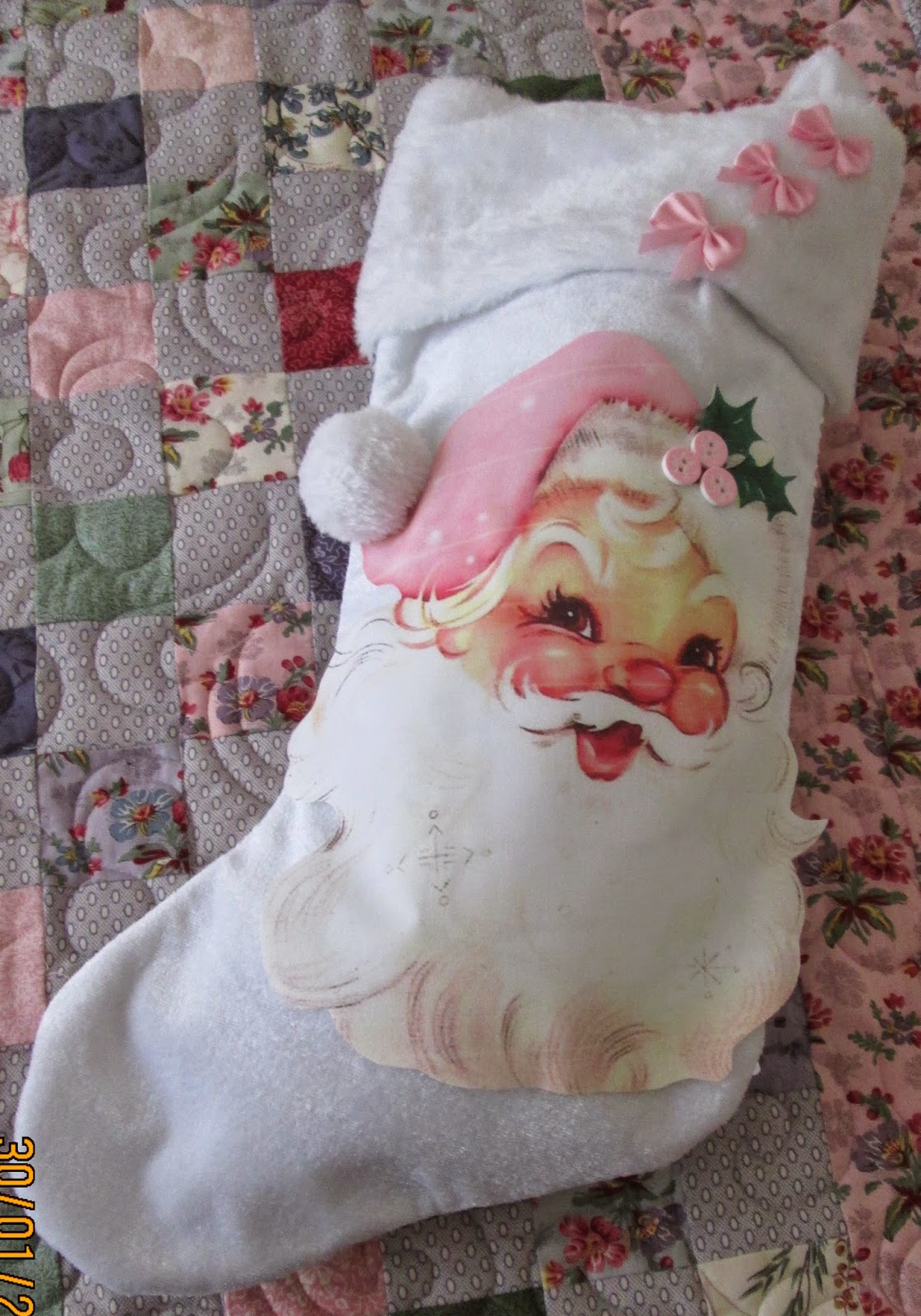 Dia Duit, I have been quite industrious this month, working on projects for this years Christmas Season. Thank you Narelle, for this great concept and being our hostess.
I enjoyed making the Stocking, in the softer colours.January finish.
Sla~n, O'faigh
Posted by Binsa at 15:00 4 comments:

I am joining in this year. Here is my first XMAS item finish. I saw picture on Pinterest of this made into a cushion and thought I'd make a mini. 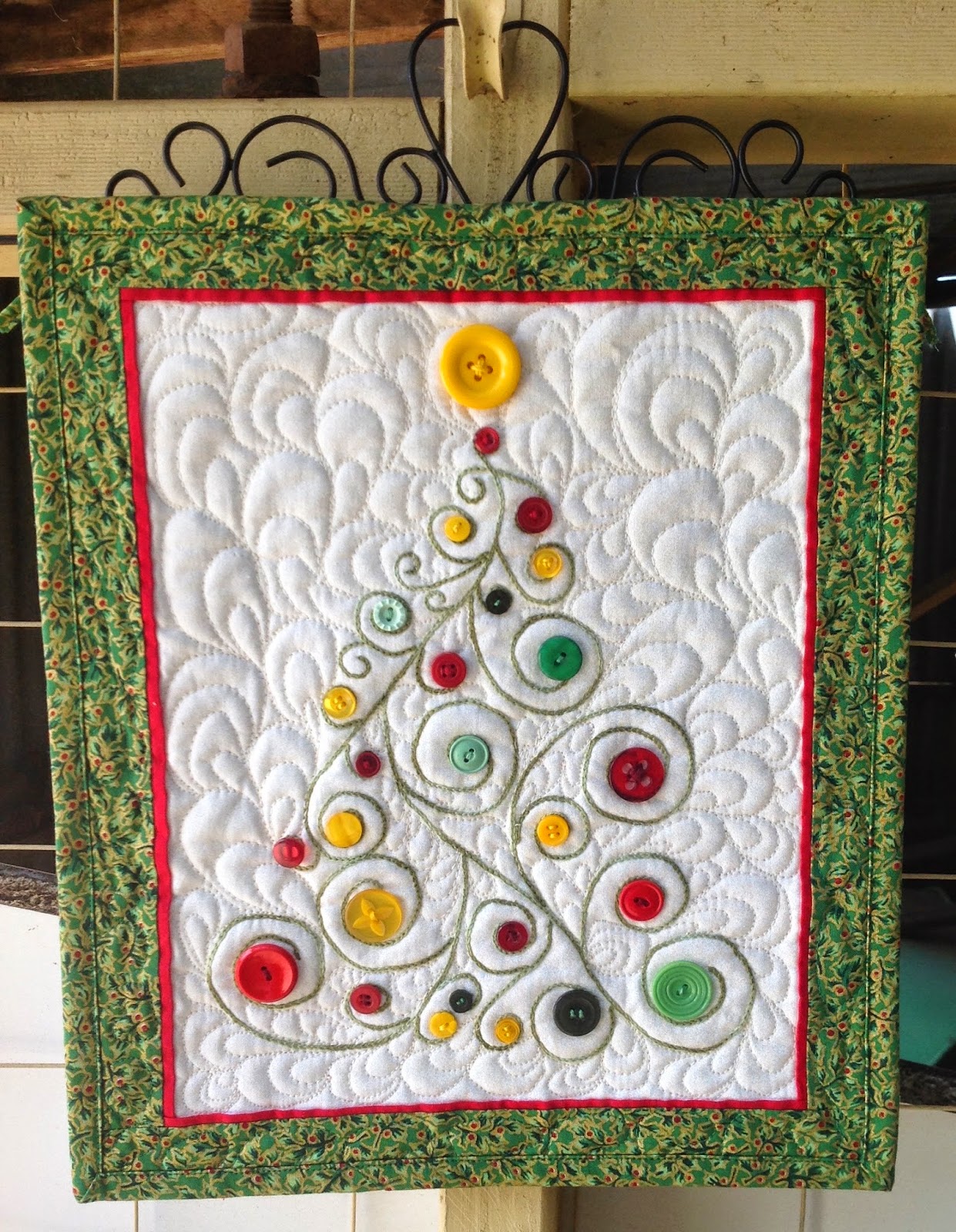 Who would have thought there would be so many
of us playing with Christmas stuff in January?
We are obviously very dedicated Elves :)

Thanks Narelle for hosting us in the Workshop again,
and welcome newcomer Elves :)

A stitchery for me this month 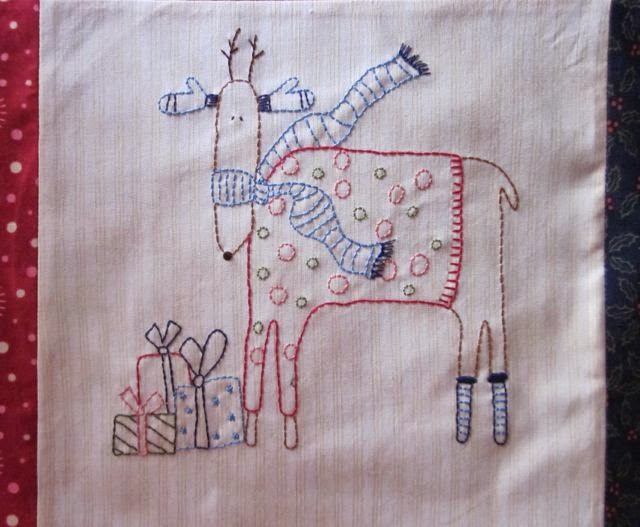 Merry Christmas making everyone :)
Sisbabe
Posted by Sisbabestitches at 14:00 4 comments:

My January item is the same as many of you have done this month. The free stitchery pattern from Anni Down has been popular. I'm sorry the photo isn't the best one. I have used green DMC tread for the stitchery, and fabrics from the stash for the borders. 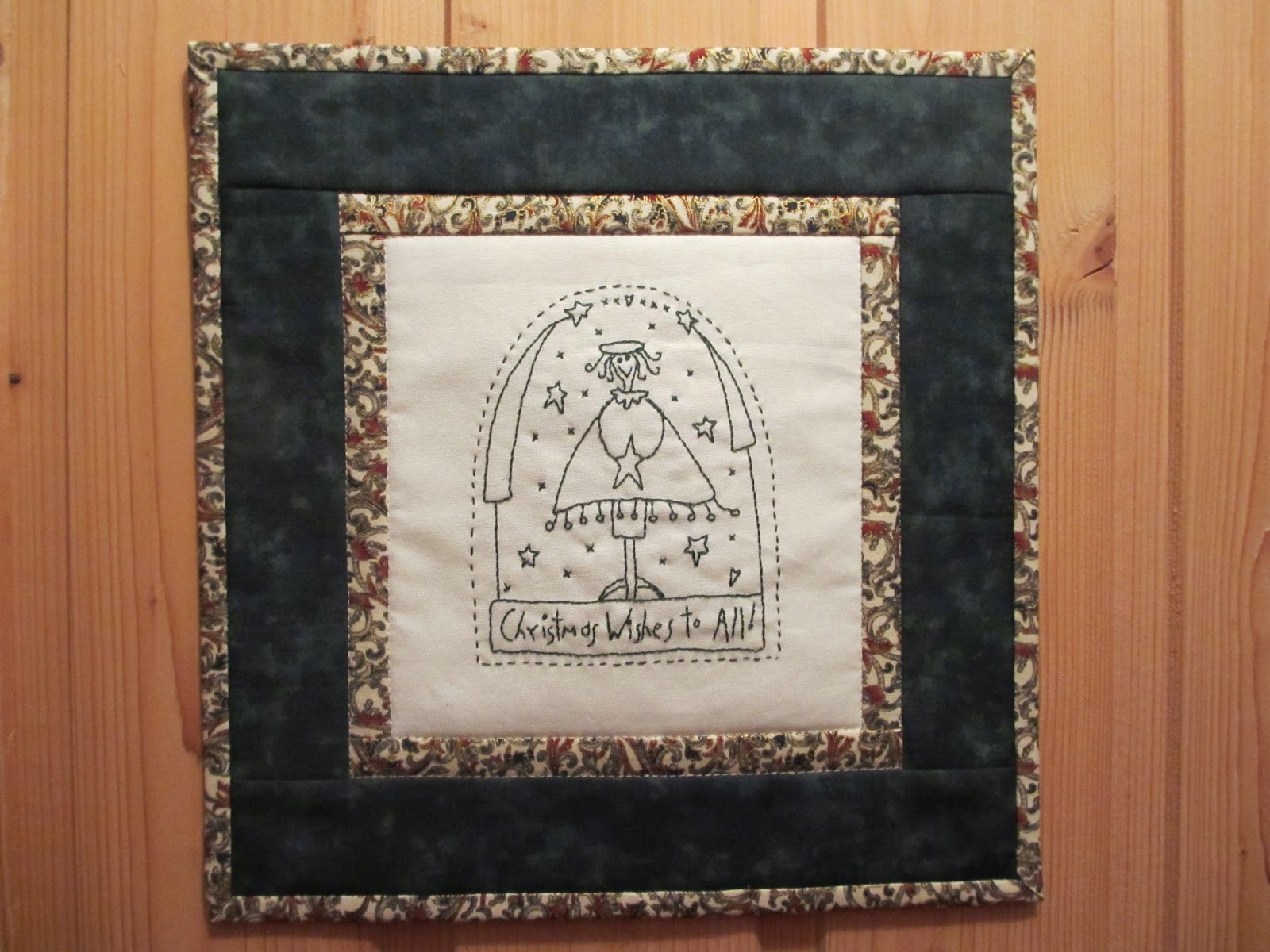 After having a bad year last year I have decided I am going to be good and do a Christmas item once a month, whether it small or big, and I have accomplished something for the month of January .... yay!! 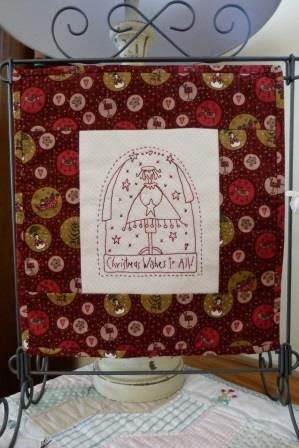 This one is Anni Downs Christmas Wishes pattern and it can be found here.
I used Cottage Garden Thread Hugs & Kisses and the material is from Lynette Anderson Designs

Thanks Narelle for keeping us going with this.... it is fun and even though I didn't do much last year there were a few things ready 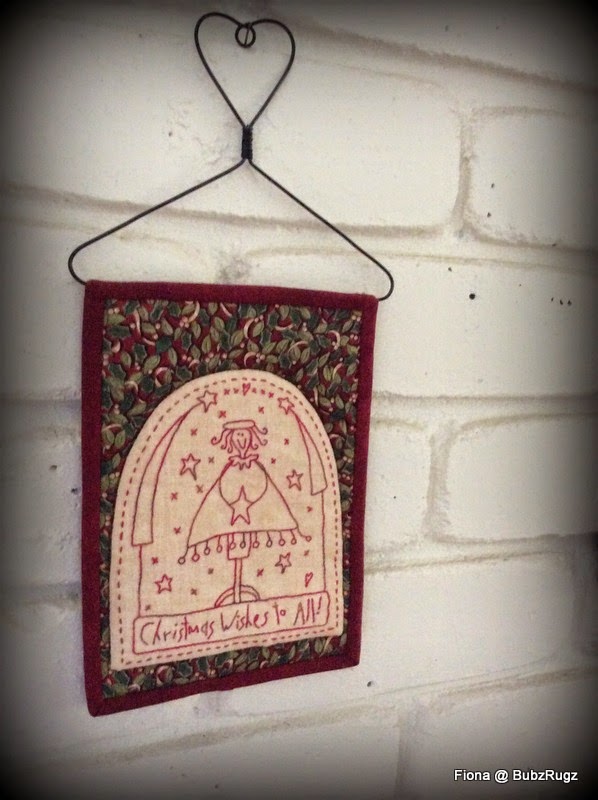 I luckily had the little hanger in my cupboard which was just the right size.....

I had some drama's with thread bleeding so I had started another one... then I tea dyed the first one so I ended up with two... 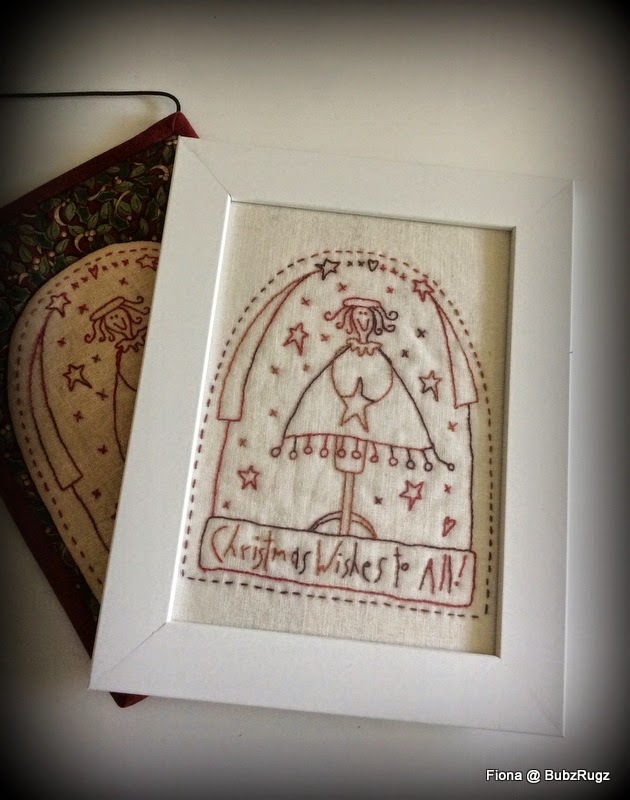 this one went into a simple frame.

Email ThisBlogThis!Share to TwitterShare to FacebookShare to Pinterest
Labels: Fiona

Happy 25th!  Our workshop is humming with cheerful elves getting busy with their Christmas goodies. Lovely to have everyone joining in and thank you for all the inspiration and encouragement you share here. A jingly welcome to a couple of new elves taking part in the merriment.

I'm off to a flying start with a finish to share. This little angel could be a very busy little angel granting wishes. 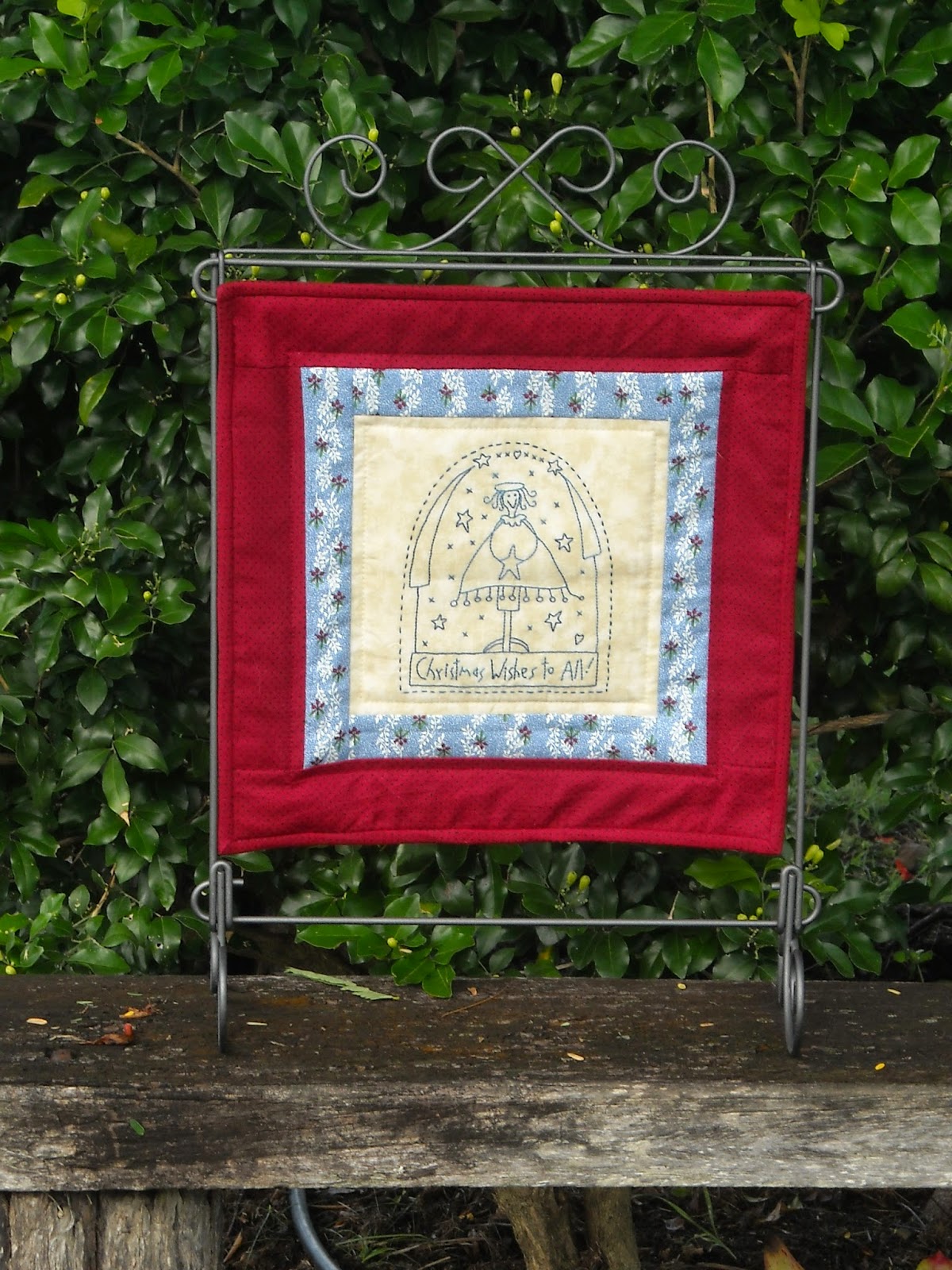 First item for the New Year is a block.
I will be using it in a special project as the months go by.
Thanks Narelle for bringing us all together again in 2015. 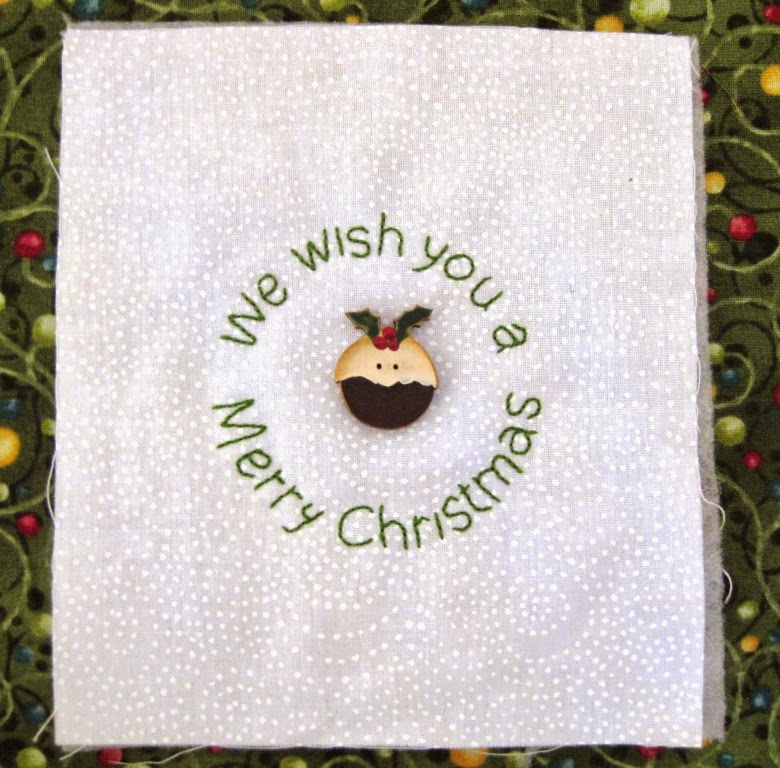 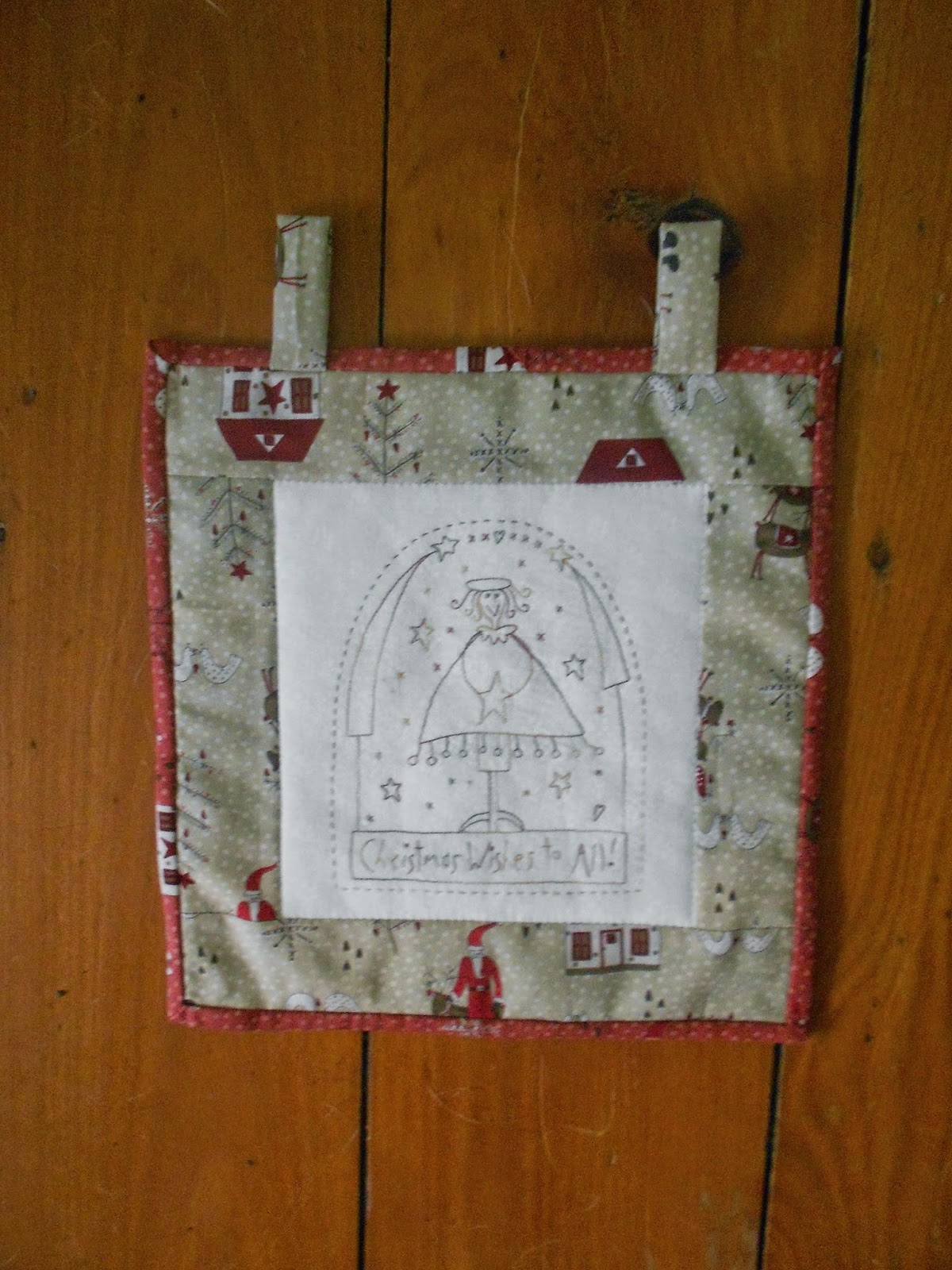 My finish is a little Anni Downs stitchery that was a freebie.

..and now this mini quilt can go into the box till Christmas...it feels good to start the year with a finish. 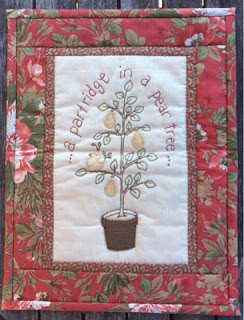 Firstly I would like to say sorry for being absent for the first half of January ... hard to believe already 1/2 the month is behind us. All I can say is 'the drought' got in the way!  Thankfully we have now had some nice rain to start the grasses growing and only this week have been able to return the last of our cattle to their correct paddocks. So now perhaps I can don my chief elf hat and return to the workshop. 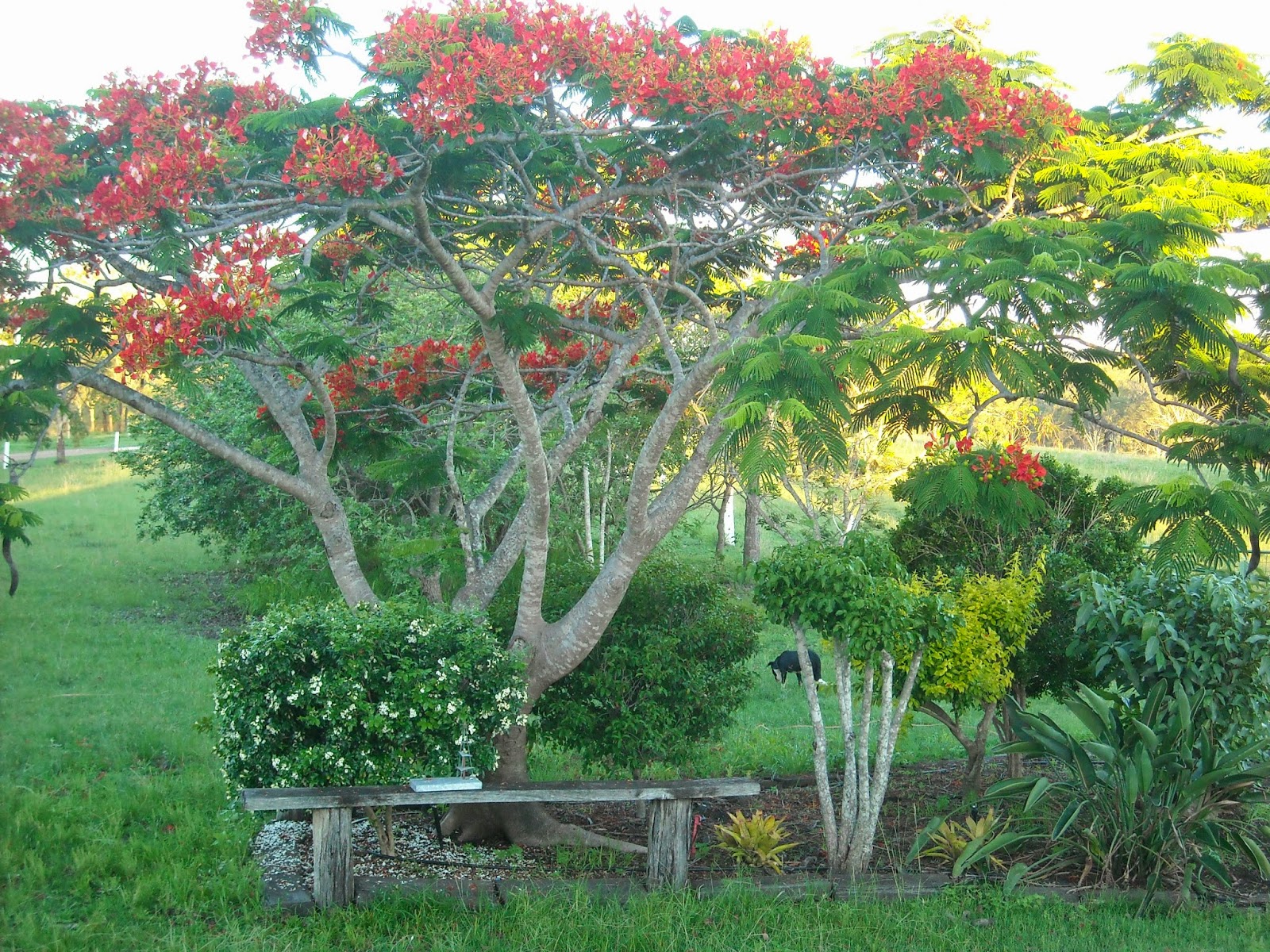 A huge thank you and well done to all the lovely elves who managed to store away their Christmas goodies through 2014. Hope you enjoyed bringing them out from storage and decorating or gifting all your lovely handmade items. My mother, daughter and daughter-in-law were very happy with their new kitchen hand towels. Just as a little something extra ... I have done a random draw and 2 lucky elves will be receiving a little something in the mail.

Random Draw No. 1 ~ I placed the name of each month in a bowl and drew out   **** NOVEMBER ****  So if you posted a finish in the month of November you're one step closer.

Random Draw No. 2  ~  I placed the names of each elf who posted a finish in November in a bowl and the lucky elves are .... Marina and Maria .... congratulations!  Marina, your's is on it's way as I had your snail mail addy. Maria if you could email me your snail mail addy I'll pop yours in the post when I'm in town again next week. 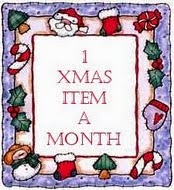 Roll Call
The rules steps are simple:
1       a:    Make an item which you will use as a decoration in your home at Christmas or

b:    Make an item to be given as a gift at Christmas or

c:    Choose one large project for the year and post your progress each month.

Please leave a comment on this post if you wish to continue in 2015. I know a few of you have already indicated this but I would appreciate it if you could also comment here. There is plenty of room in the workshop for new elves too ... the more the merrier.

I've decided this year to go with just 1 large project for the year and will post progress each month. Last year I made a start on 'A Merry Christmas Garden' by Gail Pan and would love to keep this one growing. 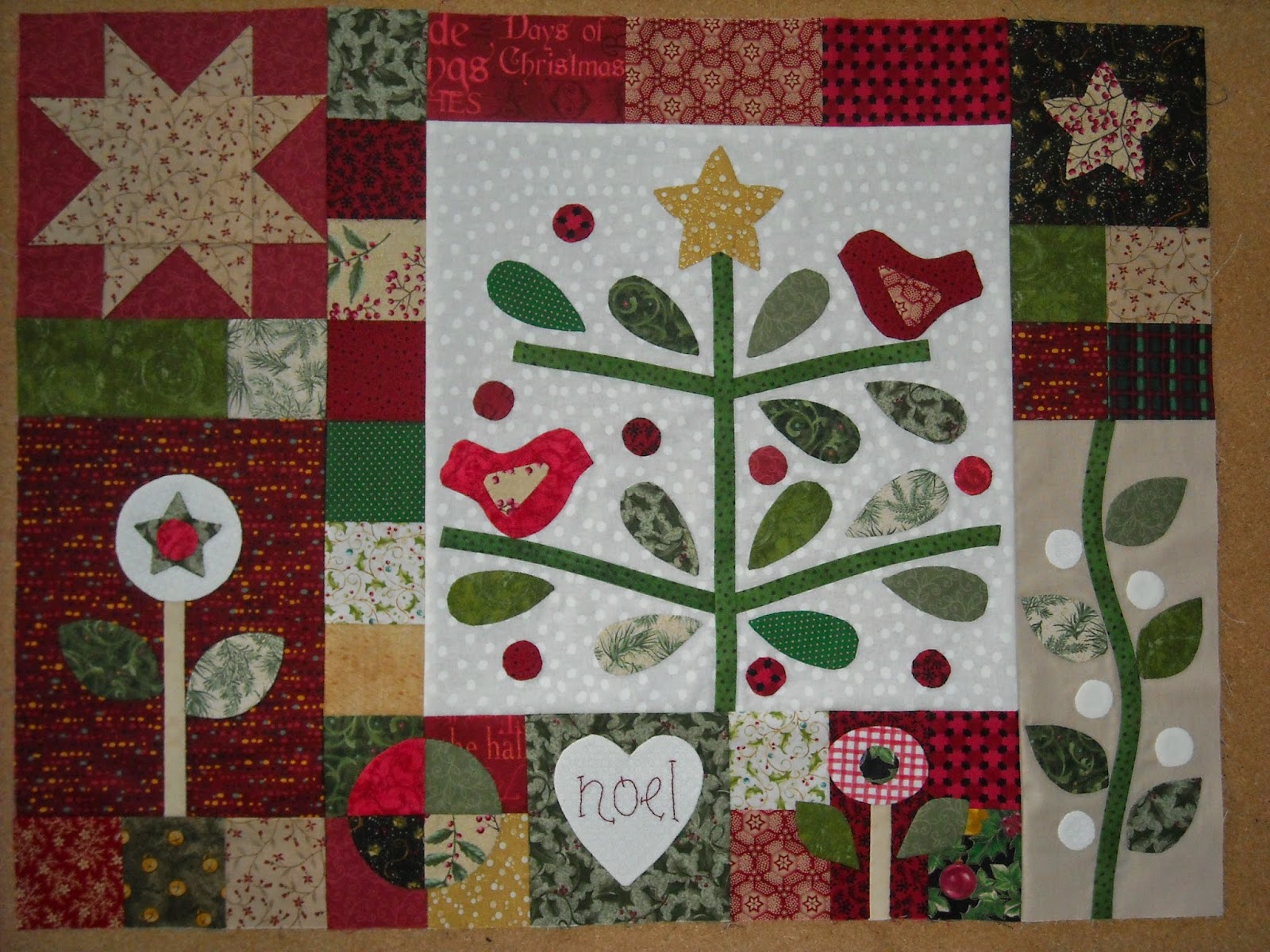 Hi Narelle, Happy New Year to you and all the other Elves!  I was wondering if we want to start again with you this year for one item a month, do we need to 'sign up' again, or just continue on here?  I'm still not sure if I will do another 12 items this year as I've got a few other commitments, but I've also still got a lot of Xmas fabric in my stash that I'd like to use up!
Can I just pop in when I've done something with it through the year?
Posted by Gina E. at 09:39 2 comments:

Since I've posted anything. 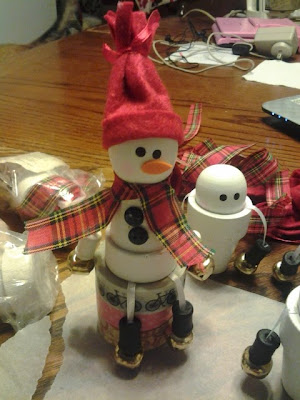 These will hang from gift bags next Christmas.
Posted by e at 10:00 2 comments:

On coming very late to the party

Well, I did get some presents knitted but no where near 12! Never-the-less I thought this was such a good idea, and if I'm honest feel a little guilty that I did not join in properly, I thought I would share the photos of my FOs all together here, just before New year is out!

Firstly there is Barndom a pattern by Steven West, knitted for my friend the writer Elizabeth Speller 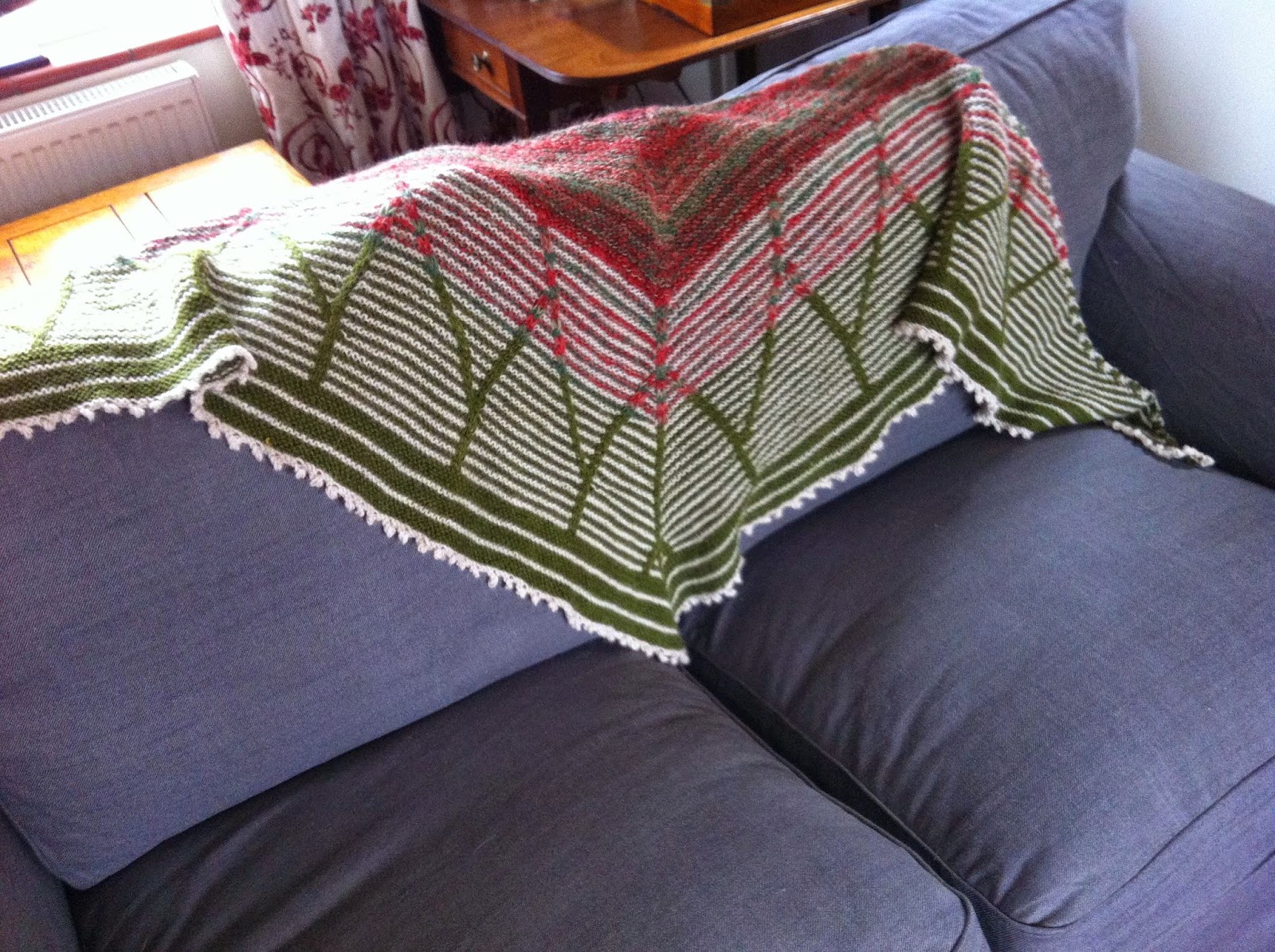 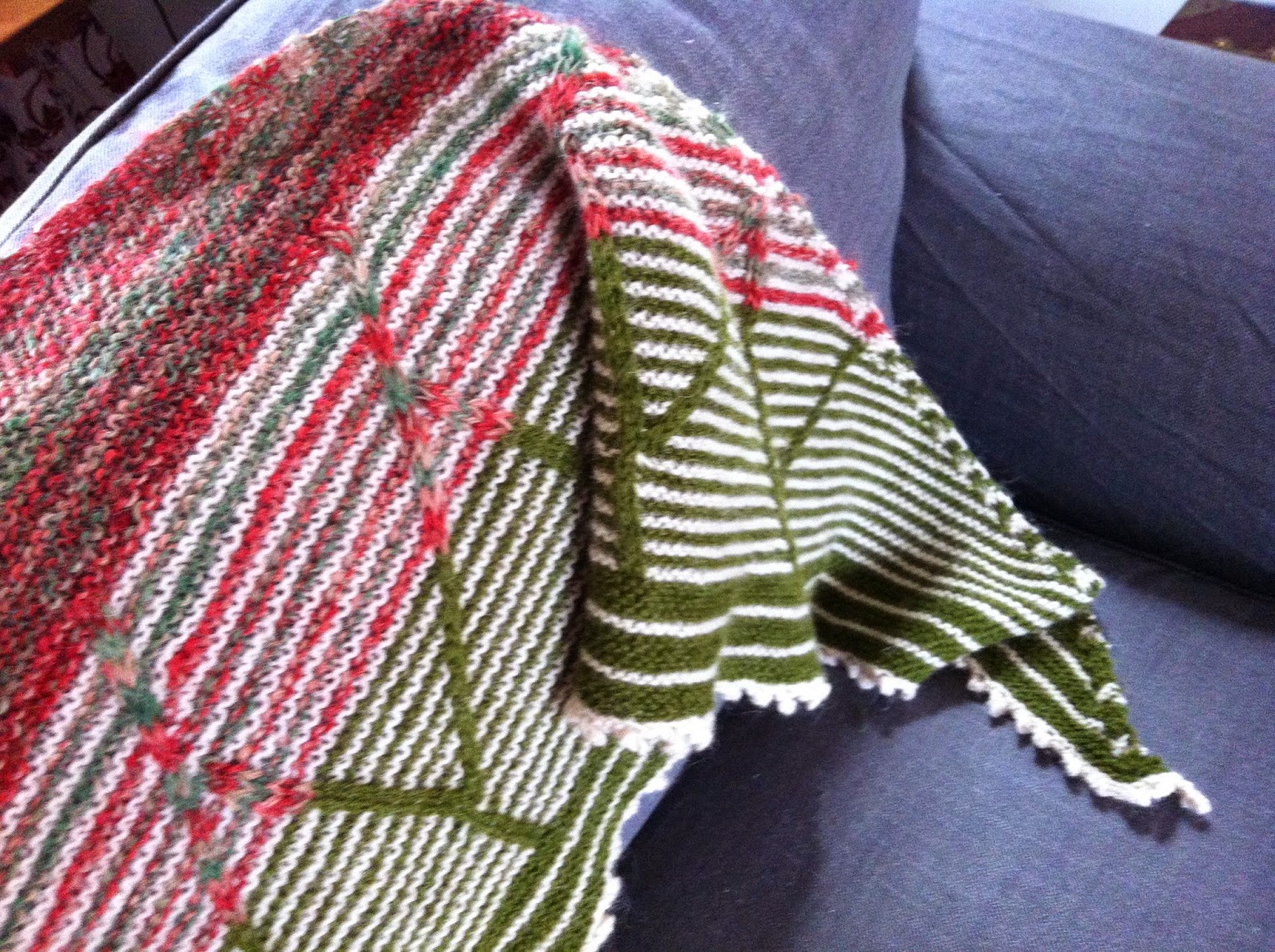 I never quite stick to the patterns I use, in this case I kept knitting with the handspan (the shawl begins with a small garter stitch tab) until it was all used up, introducing first the cream then the green, I think the picot bind off was also my modification. 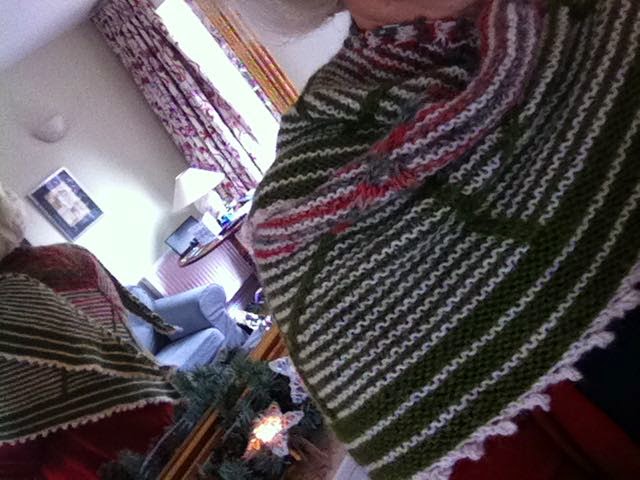 Then there is a pair of socks in Fyberspates Vivacious a DK weight hand dyed super wash wool.  The pattern is my own, that is I made it up as I went along, knitting the two socks at the same time on two circulars so that I could try them on as I knitted 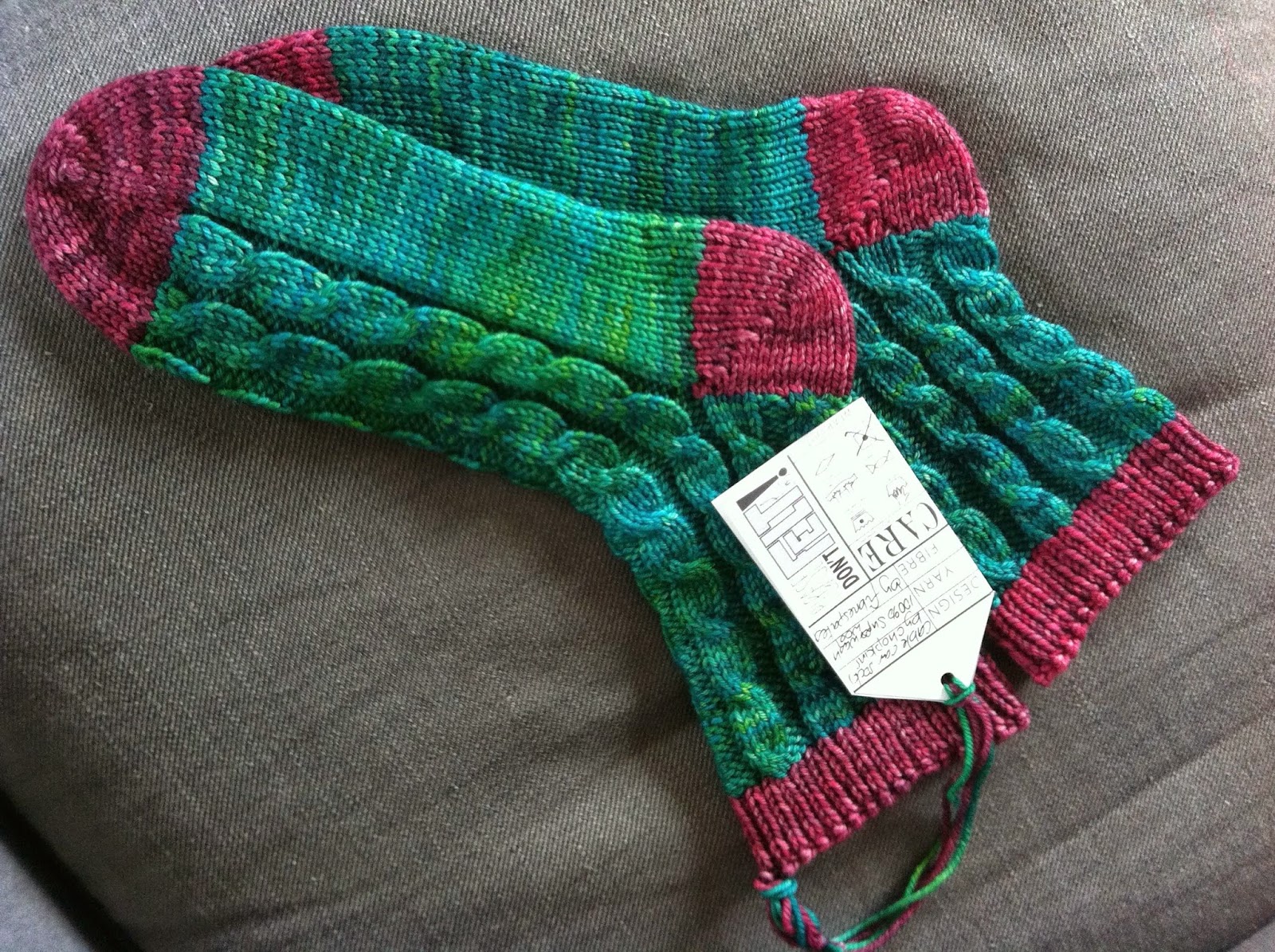 The cables alternate in an attempt to create a ripple effect 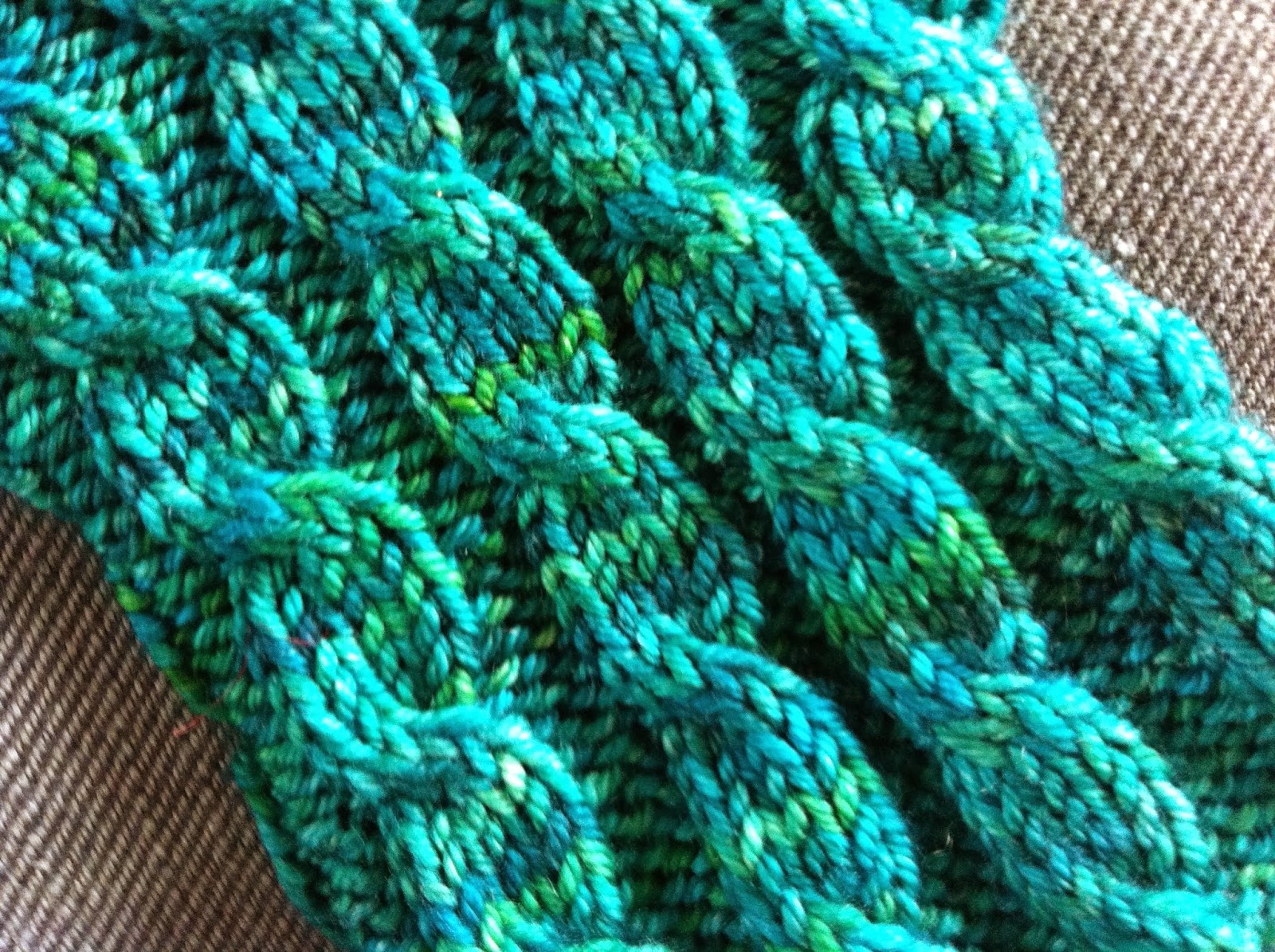 Lumpy space,  for Caron is also by Steven West.  Again I used some of my own handspan, the fibre in the centre is silk brick by Hilltop Cloud, the plum colour Berry Compote by Porpoise fur, the blue and green is Manos del Uruguay fino 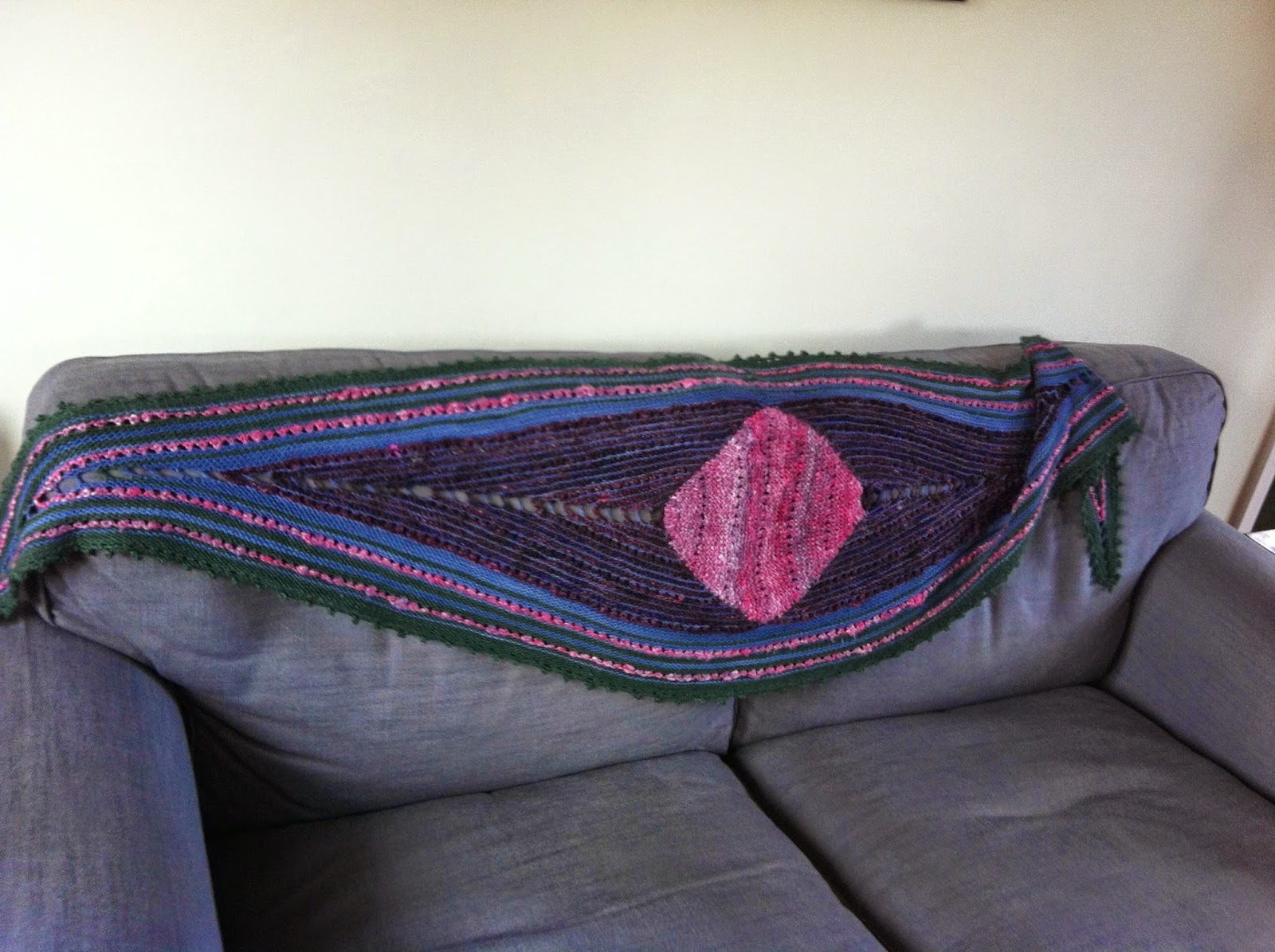 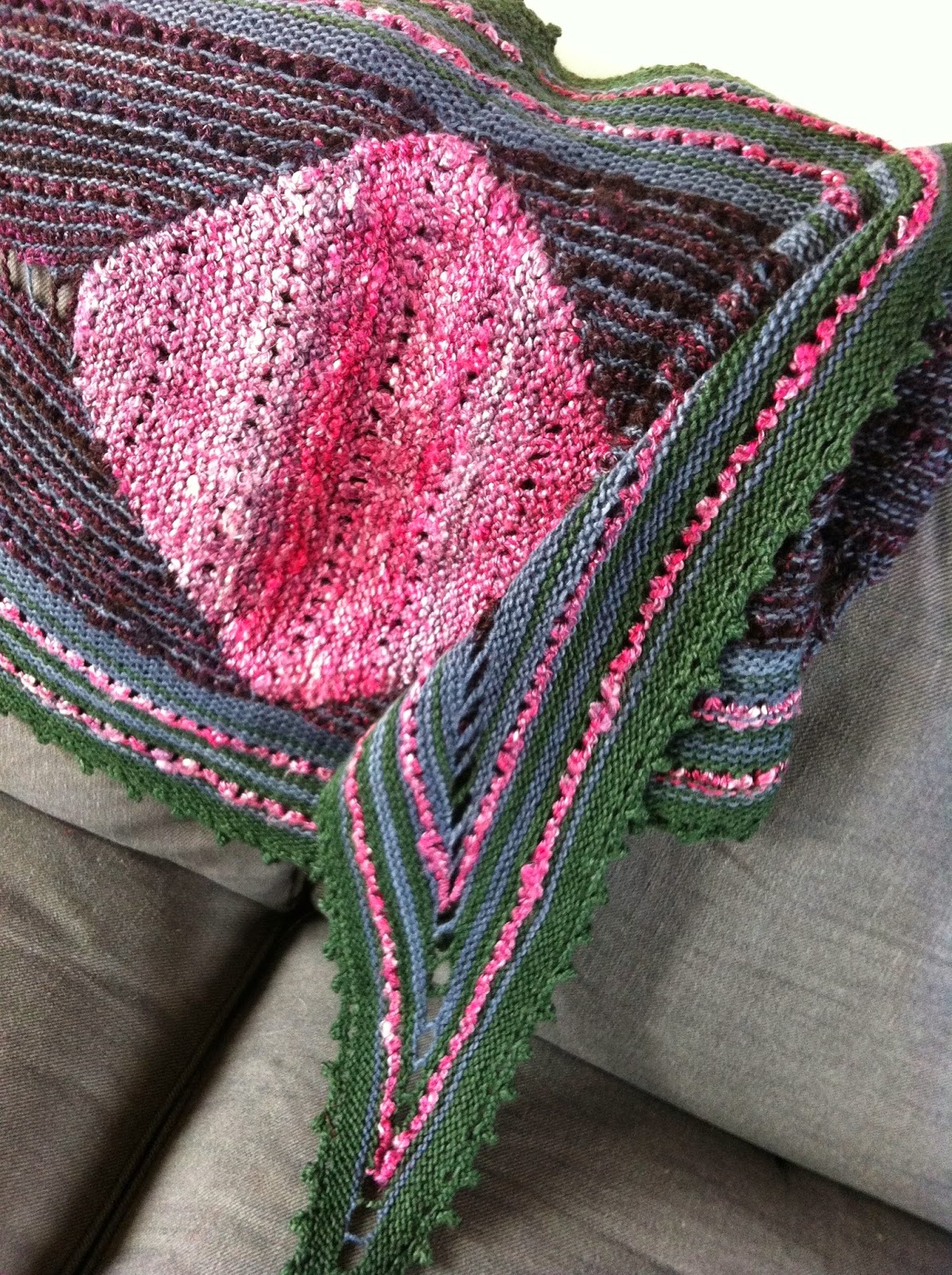 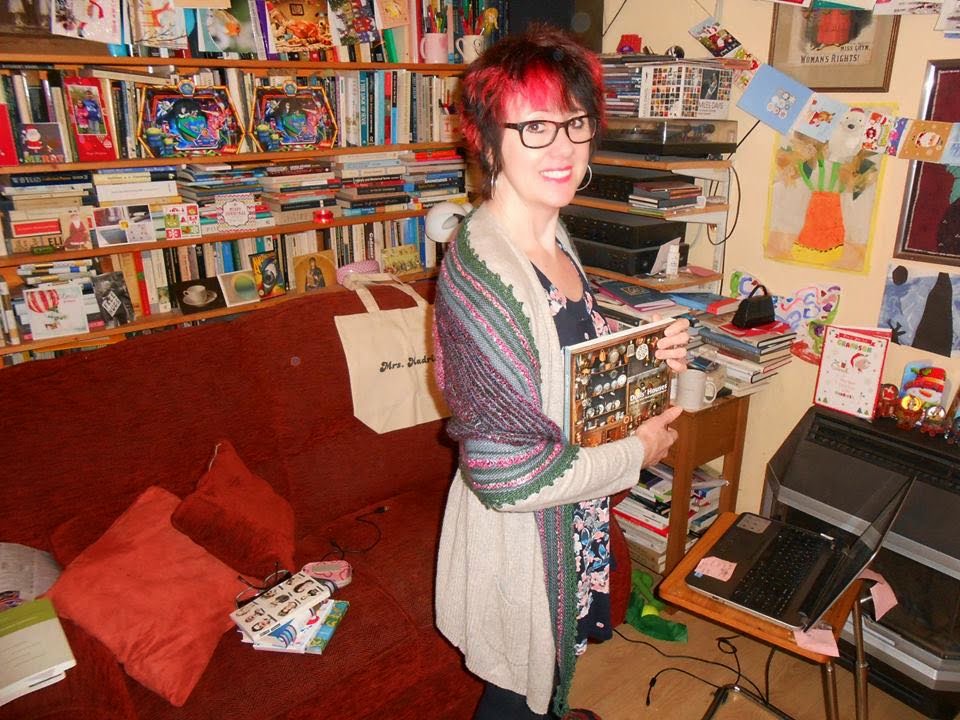 Finally there was a scarf for my daughter's boy friend in four colours of Rowan Worsted pure wool.  I didn't get it finished and had to give him a card on Christmas day containing a promise, which he already knew about because he read my blog!  But it is done now,  here it is blocking, and yesterday I delivered it.

And next year?  Perhaps I shall be a little more organised.  I've also made a resolution, more about that on my own blog 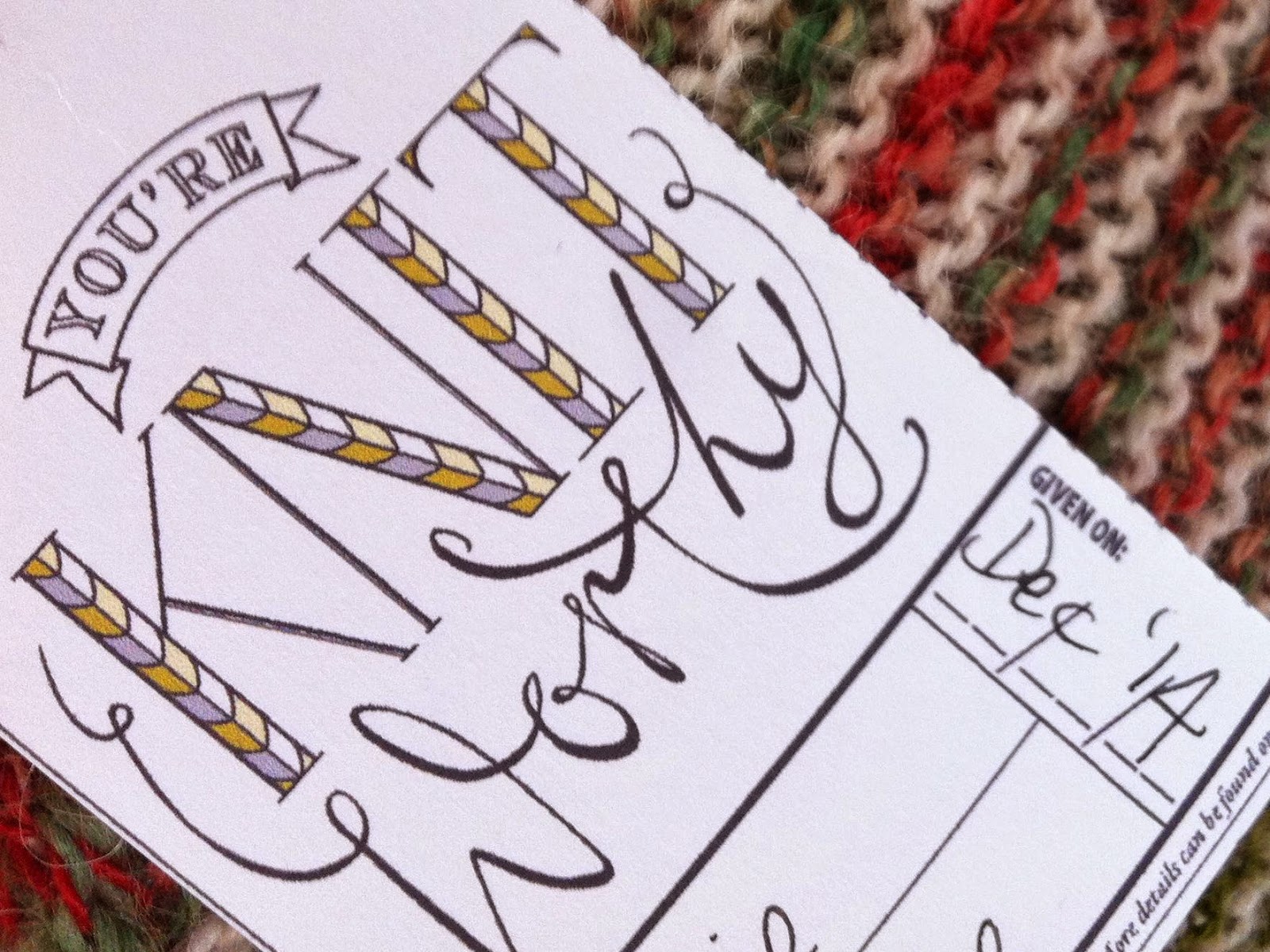 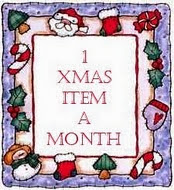 How to Join In